ThoughtGallery.org > Curator's Picks > Art > From Book to Screen to Broadway: A Talk with the ‘Big Fish’ Team

From Book to Screen to Broadway: A Talk with the ‘Big Fish’ Team

Enjoy an evening of conversation and performances—and perhaps a few tall tales—from the creative team and cast from the new Broadway musical Big Fish this November. 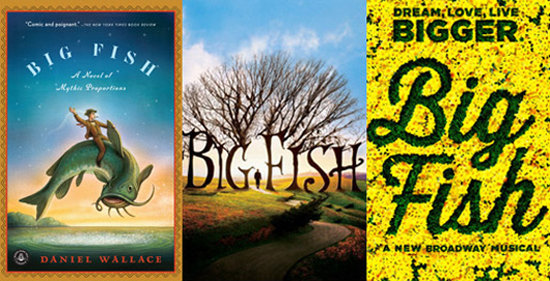 92Y presents an evening with the creative team behind the new Broadway musical Big Fish on Sunday, Nov. 24 at 7:30 p.m. Screenwriter and book of the musical John August with lead actor and actress Bobby Steggert and Kate Baldwin, film and Broadway producers Bruce Cohen and Dan Jinks, Andrew Lippa (music and lyrics), Broadway director and choreographer Susan Stroman and novelist Daniel Wallace discuss the production’s journey from novel to film to stage. Expect performances from the Broadway musical Big Fish by Baldwin and Steggert.

A bestselling book, an Oscar and Golden Globe-nominated motion picture and now a star-studded Broadway musical, Big Fish is a phenomenon growing to mythic proportions.

Author Daniel Wallace notes, “No sane writer would ever dream that a little novel written in his basement laundry room, camel crickets attacking from all sides, would ever inspire a movie, or (really?) a musical; my only dream was to see it in the world as a book. That’s why that everything that’s happened to it since has seemed so fantastic and surreal.”

”In all its forms, Big Fish is a tale that speaks to people on a personal and intimate level,” said film and Broadway producer Dan Jinks. Big Fish celebrates transformative power stories can have to inspire us to reconnect and reconcile with those we love so that we can live our best life.”

About the Creative Team

John August (screenwriter and book) received a 2004 BAFTA nomination for his screenplay for Big Fish. His other credits include Go, Titan A.E., Charlie’s Angels, Charlie’s Angels: Full Throttle, Corpse Bride, The Nines and Charlie and the Chocolate Factory, for which he received a 2006 Grammy nomination for lyrics. His most recent film is the Oscar-nominated Frankenweenie, for which he wrote the screenplay and lyrics. He is a graduate of Drake University and USC’s School of Cinematic Arts.

Dan Jinks (producer) began his career working in the theater in New York. He took a detour to Hollywood, where he produced such movies as American Beauty (Academy Award), Milk (Academy Award nomination), Big Fish, Nothing to Lose, Down With Love, The Forgotten and The Nines. His television credits include “Pushing Daisies”, “Traveler”, “Side Order of Life” and “Emily Owens, MD.”  He couldn’t be more thrilled to be producing his first Broadway show, and to be working with John August (for the third time), Andrew Lippa and Susan Stroman.

Andrew Lippa (music and lyrics) wrote the words and music to the original theatrical oratorio I Am Harvey Milk that received its world premiere in San Francisco in June 2013 with the San Francisco Gay Mens’ Chorus starring Laura Benanti and Mr. Lippa as Harvey Milk. He also wrote the Tony-nominated music and lyrics for the Broadway musical The Addams Family as well as the music for the Broadway production of Aaron Sorkin’s play The Farnsworth Invention. Other musicals include the Drama Desk award-winning musical The Wild Party (book/music/lyrics), A Little Princess (music), jon & jen (music/co-wrote book), Asphalt Beach (music/lyrics) and You’re A Good Man, Charlie Brown (additional music/lyrics and arrangements). Mr. Lippa was music director for Kristin Chenoweth’s sold-out shows at the Metropolitan Opera House, Carnegie Hall and others. Accolades include a Tony and Grammy nomination, the Gilman/Gonzalez-Falla Theater Foundation Award, ASCAP’s Richard Rodgers/New Horizons Award, The Drama Desk and The Outer Critics Circle Award.

Daniel Wallace (author) is the author of five novels, including his latest, The Kings and Queens of Roam. Wallace’s work has been translated into more than 25 languages and is studied in high schools and universities across the country. He is a contributing editor to Garden & Gun magazine and is the J. Ross MacDonald Distinguished Professor of English at the University of North Carolina, Chapel Hill, where he teaches and directs the creative writing program.