‘Orange Is the New Black’ Stars Kick off Inaugural PaleyFest 2013

On Oct. 2, six cast members from the critically acclaimed Netflix Original Series Orange Is the New Black traded their tan prison jumpsuits for some much chicer choices and took the stage at The Paley Center for Media in Midtown Manhattan to discuss life behind the scenes at Litchfield Correctional Facility.

The evening was part of PaleyFest: Made in NY, an event series hosted by The Paley Center and the New York City Mayor’s Office of Media and Entertainment that celebrates NYC’s media, entertainment and digital industries. The OITNB panel discussion on Wednesday kicked off the series, which runs through Sunday, Oct. 6. 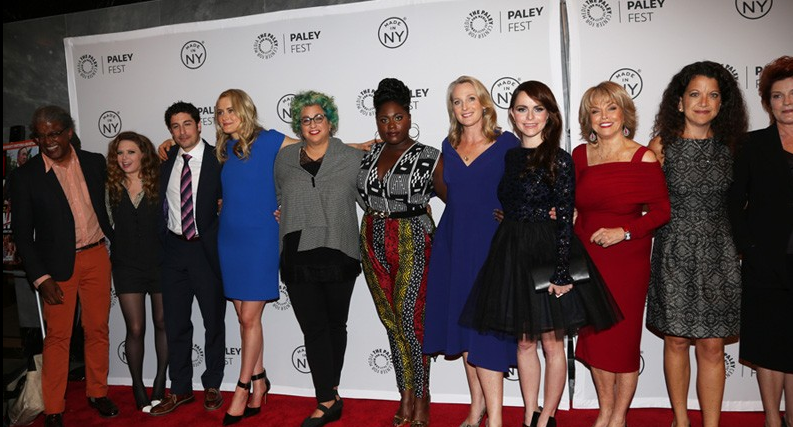 As most OITNB fans already know, the Netflix series takes several departures from Kerman’s memoir. Some scenes from the first episode are closely drawn from the book, such as the proposal scene between Piper and Larry, but other elements are much different. “Those departures keep me fascinated as a viewer,” Kerman said on Wednesday evening.

“I’m so fascinated by the book and in awe of Piper’s experience,” said Schilling, who was the first actress cast on the show. “But she gave me permission to set the book aside as I was creating my character. I felt inspired by the book but not bound to it.”

Schilling said she felt lucky to play Piper, as it’s a rare role. “The idea of who you think this blonde lady will be gets transformed over time. I think that’s rare for women across the board. For a woman [character] to be that deeply ambiguous is rare and brave,” she said.

“We had huge discussions about ‘Who is Piper?’” Kohan said. “Is she the Piper she was in her restless 20s? Is she Piper after she met Larry? She’s now in a place where she has to wrestle with all of these personas and it’s a great exploration. We all are many different people, and we’re always trying to figure out who we are—that’s the journey.”

That deep level of character development is extended beyond the show’s heroine (or antiheroine, whichever you choose) to each member of the substantial cast, which is what makes the series so compelling and is a mark of a talented group of writers. “Each character is so vivid,” Kohan said. “I always say to our writers, ‘If you can stick one character’s line in another character’s mouth, you’re not doing your job.’”

She added that it’s the chemistry between the script and what the actors bring to their roles that results in real magic on the screen.

“The cast is absolutely phenomenal. They bring incredibly rich, individualized characters to the show. It’s euphoric to see,” Kerman said. “I went to an Ohio women’s prison, and the staff said ‘We love the show. We have a Taystee! The characters are so evocative of the women we watch over here.’”

A main draw of the show is that viewers slowly learn the back story of each character and the reasons she ended up in prison. But Kohan revealed that the actors don’t know their characters’ back stories until they’re revealed in the show.

However, one theme is clear: Each character is—in her own way—seeking love and a connection with others. Even Crazy Eyes.

Uzo Aduba, who plays Suzanne ‘Crazy Eyes’ Warren—known for her unrequited obsession with Piper, which climaxes in the unforgettable urinating-on-the-floor scene—said the “crazy” part is not the real focus of her character. “It’s less about the ‘crazy’—that’s easy to play,” Aduba said. “It’s more about Suzanne’s pursuit of love. She’s looking for love just like everyone else—it’s just always maybe a hair not right.”

It’s this pursuit of emotional connection that’s at the heart of the characters’ sexual exploits, Kohan said. “You cling to people as much as you can, but at the end of the day you’re alone in your bunk with your thoughts.”

“Most people are broken and they need an escape,” added Lyonne, who plays Nicky, a former drug addict. “In prison…sex is the one sliver of freedom these women have. How we deal with those feelings in that situation is a big part of who each character is.”

One thing each character has in common, though, is that she is imperfect. “I write flawed characters,” Kohan said. “It’s not about labels. It’s about getting into these people. It’s about the complications of being human.”

See upcoming events at The Paley Center for Media.