Review: Julianne Moore at 92Y on Her Person Place Thing

More than 100 people attended an evening with Julianne Moore and Randy Cohen in the intimate Buttenwiser Hall at the 92nd Street Y on Thursday, Nov. 7. 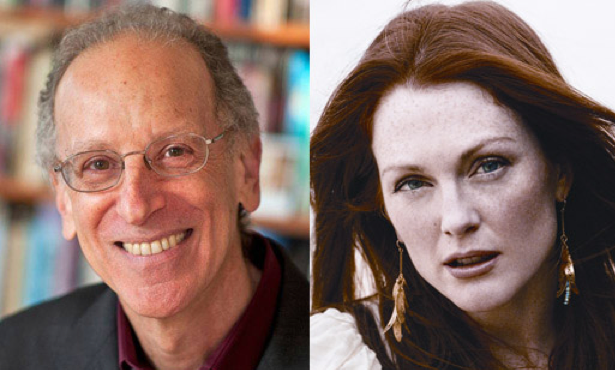 Part of the Person Place Thing series, no audience member sat more than 50 feet from the stage as Moore sat in the spotlight and Cohen, an Emmy Award-winning writer and the host of the series, uncovered the person, place and thing she cares most about. Moore also shared her excitement about her new children’s book based on her mother, My Mom Is a Foreigner, but Not to Me.

After watching 3 Women, a 1977 film written and directed by Altman, for the first time at age 11, Moore decided she wanted to be a film actor.

Years later, after Moore auditioned for an Altman film—which she didn’t get because he said, “she was too pretty for the part”—Altman called to offer her a role in another film.

“Once he’s cast you, he’s what you want,” Moore said, adding that Altman’s encouragement was helpful in developing her confidence as an actor.

Growing up in Juneau, Moore lived through avalanches, went to camp to smoke salmon, made blubber bubble gum and went to the movie theater every weekend with her sister, regardless of the film.

“I’ve always had a fantasy of having an Easter tree,” she said. After taking water-coloring lessons from one of her yoga friends, Moore saw a découpage egg and requested a class on making the pretty spheres. “I soared in that class. I couldn’t stop,” Moore said. “I made six eggs.”

Moore achieved her goal of having an Easter tree, but she’ll have to make new eggs next year: “My dog ate the eggs,” she said.

Be the first to know about new lectures and uncover the top events by joining the Thoughtlectual community at no cost at thoughtgallery.org/register.