Salon/Sanctuary Concerts in NYC: An Interview with Guitarist Pascal Valois

I caught up with French-Canadian guitarist Pascal Valois the other day and we got to talking about history, obscure instruments, and the history of obscure instruments. Pascal will perform a solo recital on Early Romantic Guitar as part of the Salon/Sanctuary Concerts mini-series France à Cordes at NYU Maison Française on April 26th. Following is a condensed version of our conversation, which traversed the Romantic, the Classic, the Napoleonic, and everything in between… 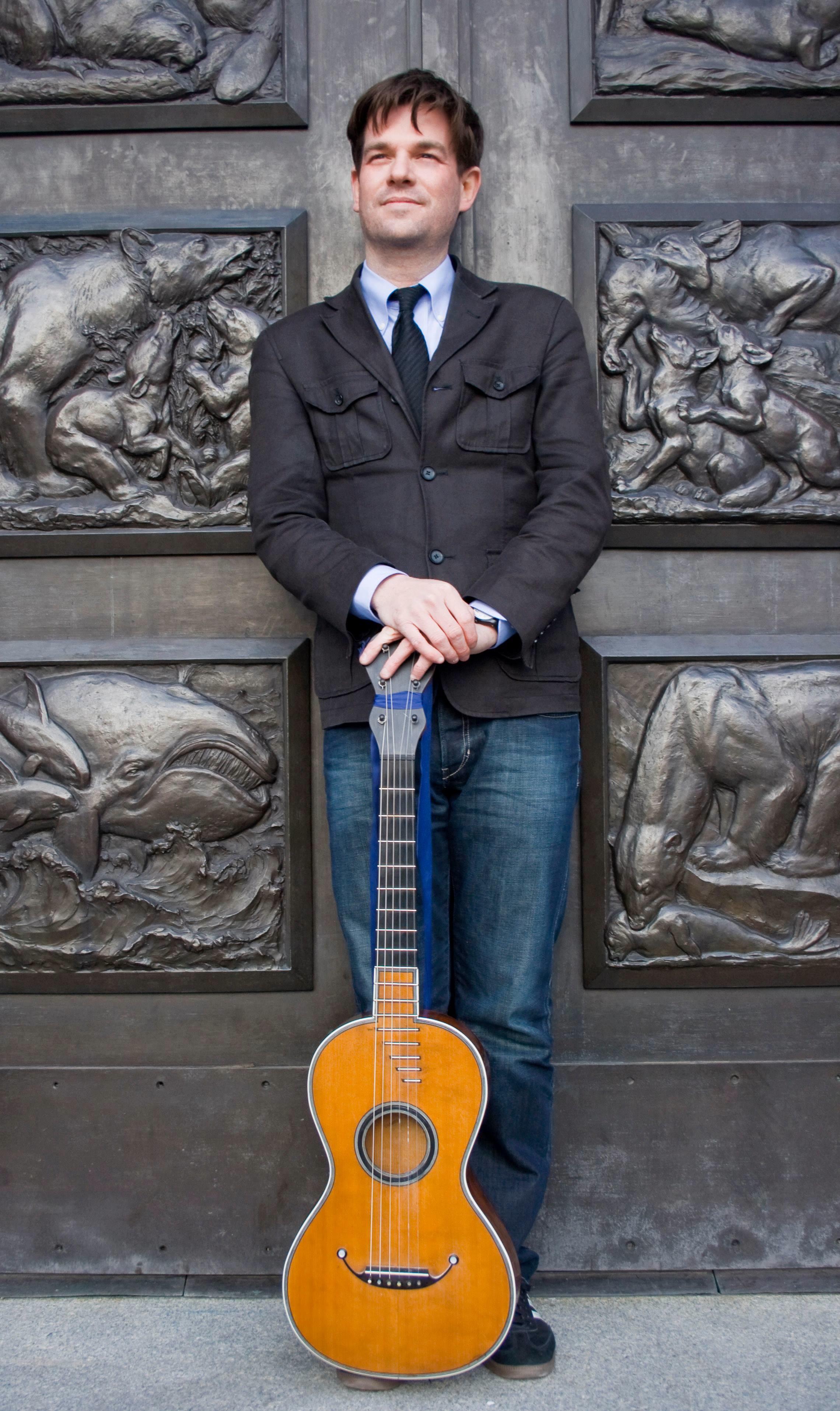 CP: The title of your program translates into English as “The Napoleonic Guitar.” Can you tell us more between the connection between Napoleon and your instrument? Any thoughts on why the Early Romantic Guitar peaked in popularity at such a specific point in history?

PV: The title of the concert refers to Bonaparte mostly in terms of a time period. The reign of Bonaparte coincides closely with the Golden Age of the guitar. Bonaparte was not directly involved with sponsoring the guitar, but his wife Joséphine was. She is the dedicatee of the Grand Sonata for piano and guitar by Charles Doisy (?-1804), among others. I believe the guitar peaked in Europe between 1800 and 1830 for many reasons. First of all, the harpsichord was in decline because it was associated with the aristocracy, but the piano, which came to replace it, wasn’t that widespread yet. The guitar was associated more with common people than the monarchy, so it fit the spirit of the time and became very popular. The guitar was also more affordable so it could be purchased and mastered by a greater variety of people. Finally, the instrument appealed to a sense of historical nostalgia—with all the Greek imagery of the Napoleonic age, the guitar “looked the part” so to speak, because it reminded people of an ancient Greek lyre, yet it also was reminiscent of an instrument of a medieval bard, so it evoked a European pre-industrial past that was very vivid for the Romantic movement. 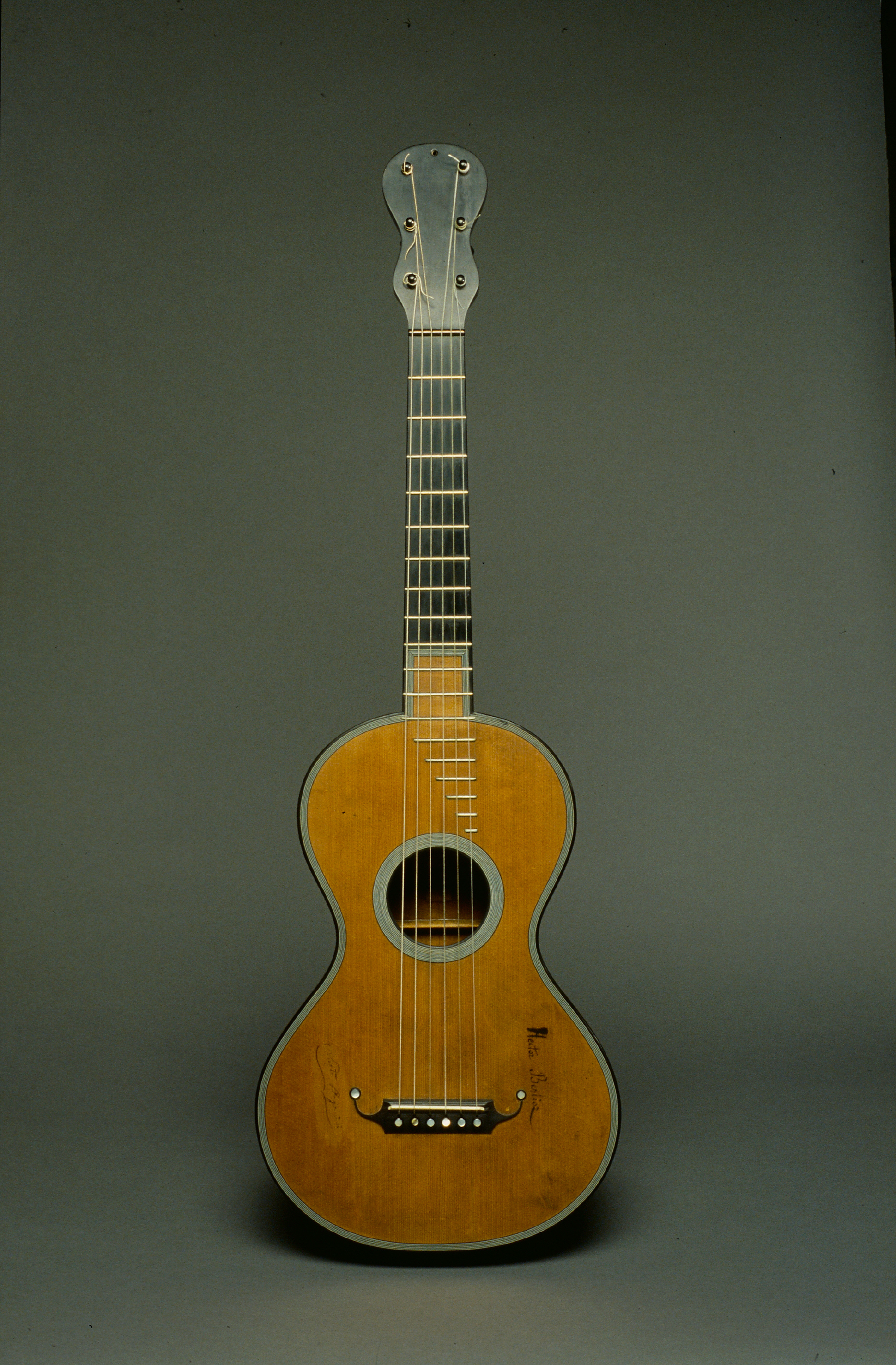 CP: When we think of the word “Romantic” in music, we think of big, grandiose gestures and sweeping emotional statements. But unamplified guitars don’t tend to be loud, and the Early Romantic Guitar is an even smaller and more intimate instrument than the Classical Guitar. How does such an unassuming instrument fit in with the age of Romanticism, when instruments got bigger and louder rather than smaller and quieter?

PV: It is a most pertinent question! We often think about the pompous and grandiose side of Romantic music, but there is also an intimate and delicate component to this music and the guitar is naturally well-suited to reveal it. For instance, we can think about what the Germans called “Nachtmusik” (works intended for performance at night). The mellow and enveloping sound of the romantic guitar creates a nice atmosphere for that sort of music. Moreover, I think the guitar is also capable of tackling more extroverted and flamboyant music. My former professor Jean Vallières would say that a cry is even more dramatic if it comes from someone with a soft voice, like a child!

CP: Is there a particular nationality that is represented more than others in the repertoire? If so, why do think that is? Any thoughts on your instrument’s place in history?

PV: With the exception of Fernando Sor, the composers featured in my program are French. We associate guitar mostly with Spanish composers, but the instrument was present in every European capital, especially Paris, London, and Vienna. I deliberately wanted to draw attention to the French composers because they were often excellent, even though history has chosen to remember mostly Italian and Spanish composers.

CP: Do you usually do your own research to find your own performance repertoire? Is there a lot already out there? Do you have any particular “eureka” story about a really exciting music discovery?

PV: I try to do as much research as I can with regards to gathering the repertoire as well as on finding the most accurate way to play it. It is not easy to get your hands on the music because most of it has never been published since it was first released in the 19th century. When I was a student at the Schola Cantorum in Basel, I would try to visit European libraries as often as I could. I came back from Europe with a big stack of guitar scores; I still am in the process of deciding what deserves to be played in concert or recorded. I remember one exhilarating night in the train between Liège (Belgium) and Paris. I had spent the day in Liège Conservatory’s Library and I found the unpublished score of the oldest guitar concerto. I was holding onto my bag as if it were full of gold bullion. Finding the scores of Victor Magnien at the Bibliothèque Nationale de Paris was also a thrilling experience!

CP: Many of us are familiar with the Classical Guitar, but not many know about the Early Romantic Guitar. How is it different?

PV: The Early Romantic guitars were smaller and simpler in construction than their modern counterparts. They are very close to the shape and size of the baroque guitars, except that they have six single strings (like the modern guitars) rather than five double-strings. Their smaller scale and lower string tension make them especially reactive and well-suited for the lyricism and abrupt change of dynamics so prevalent in romantic music. I have always found that it is much easier to “speak” (or to shape the music) on a romantic guitar than on a modern one. 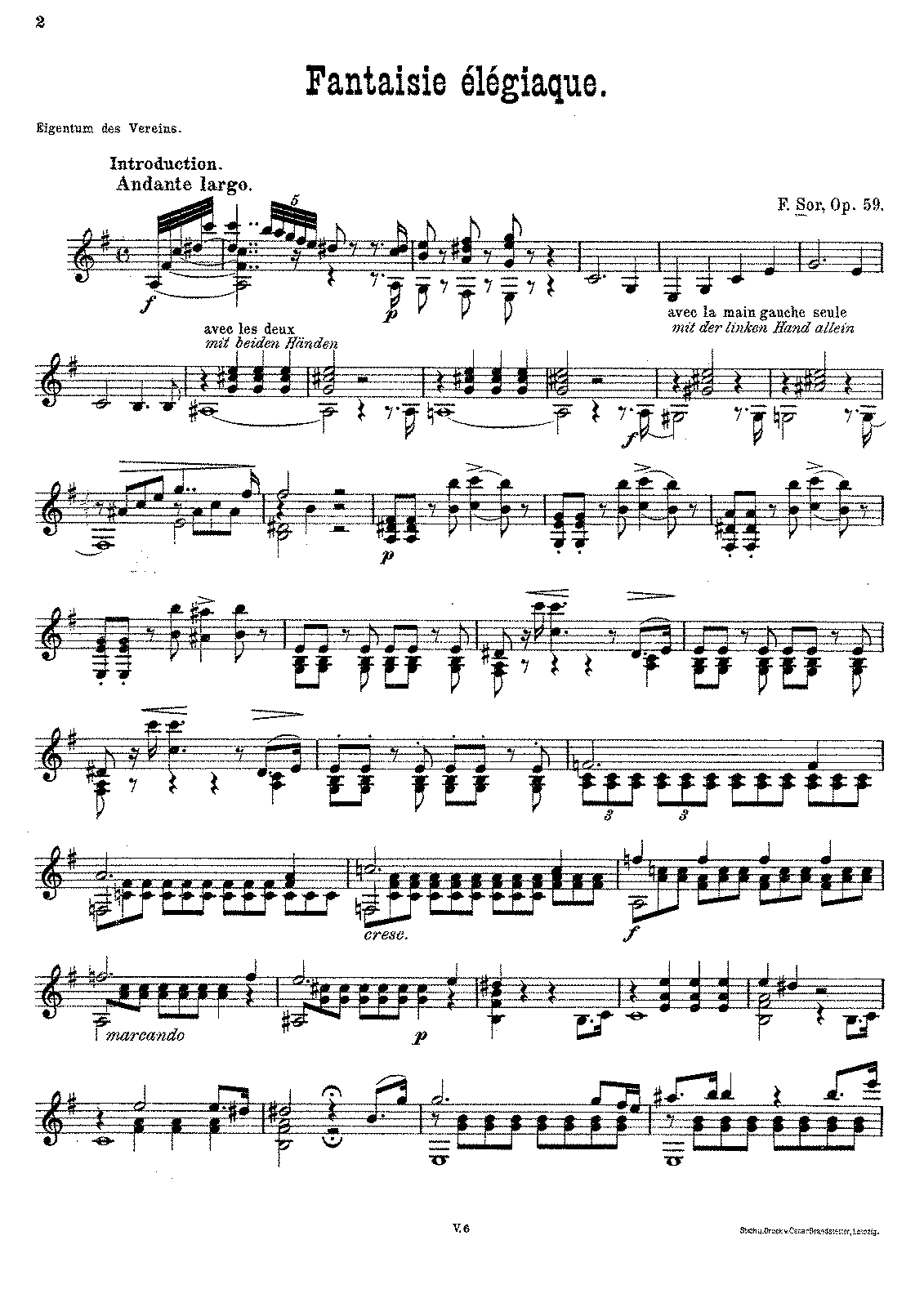 CP: Your concert with Salon/Sanctuary will be your debut on the series. Can you tell us a little about the program you will be presenting?


PV: I am really excited about the program I am presenting in the Salon/Sanctuary series. It contains music published (and mostly composed) in France between 1810 and 1840. During this era, the guitar was extremely popular in France. Some people of this era even referred to the fashion as the Guitaromanie (guitar-mania). I will explore different angles of the Guitaromanie: the Italian opera trend (Rossini’s Barber of Seville overture arranged for guitar), the influence of Mozart (Variations on the Magic Flute op. 9 by Fernando Sor [1778-1839]), and the French classical style (Sonate Brillante op. 1 by Louis-Ange Carpentras [1786-1854], as well as Sor’s Fantaisie Élégiaques op. 59). 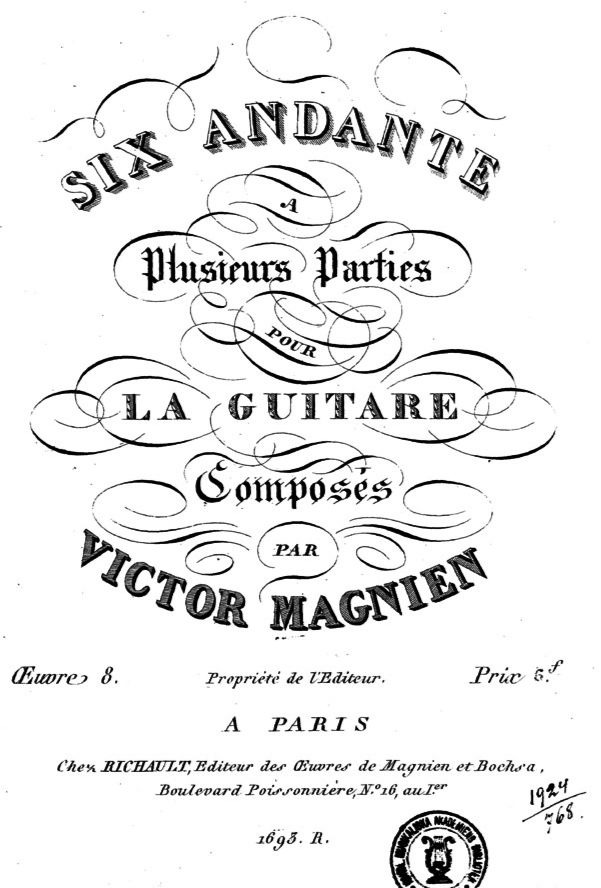 CP: What are your favorite composers for your instrument?

PV: This a really hard one! If I had to narrow my interests to one or two composers, I would have to go with the French guitarist Victor Magnien (1804-1885). My first CD was dedicated to Magnien’s music for solo guitar. I love the way he skillfully uses all the means available to a guitarist to express all the drama and the emotions of the romantic music. It feels as if it would be hard to add or remove anything to his music. In my upcoming concert on the Salon/Sanctuary series, I will play three of my favorite pieces of Magnien, from his Andante op. 17. Another favorite composer is represented in the program, Fernando Sor. Although he was a Spaniard, Sor spent a lot of time in Paris (where he is buried), where he created one of the most important bodies of work for the instrument.

CP: Did you start with this instrument originally, or did you come to it some other way, like through classical guitar or lute? Is there a particular teacher who guided you and inspired you in this unusual path?

PV: I started by playing classical guitar when I was around 12 years old. I was drawn to romantic music really early in college, but I began to consider playing that music on an original instrument much later, while I was doing my Master degree at the Montreal Conservatory. The guitar professor was Jean Vallière: he was really knowledgeable and interested in romantic music and he encourages me to try an actual romantic instrument. I actually bought my first romantic guitar in NYC, from Manhattan School of Music professor David Starobin. David’s teaching also had a great influence on me. The third professor who guided me in this path is Schola Cantorum’s teacher Hopkinson Smith. Hoppy (as he insists people call him) is one of the most prominent lutenists in the world. I felt lucky he accepted me as a romantic guitar student in Basel. 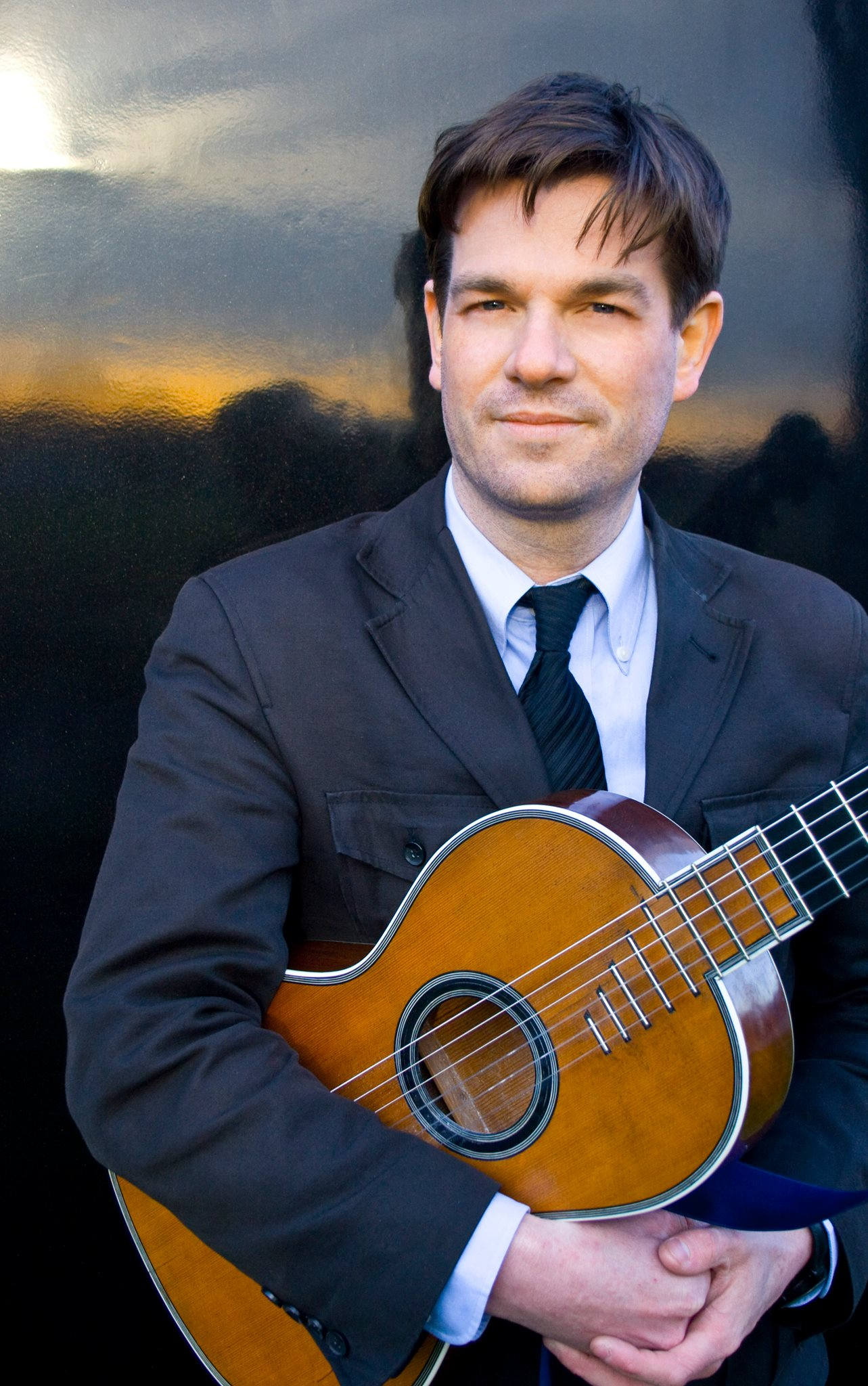 CP: Does the Early Romantic Guitar have any particular technical challenges beyond what is required of standard classical guitar? Are there any kind of unique interpretive challenges or approaches?

PV: The first challenge lays in the guitar romantic music itself. People of that era were fascinated with virtuosity. Therefore, most the music composed for professional performers (rather than amateurs) is almost always really difficult to play. With its smaller size, the romantic guitar helps the interpreter to tackle passages with big stretches and jumps across the neck. But for the same reasons, the instrument requires more precision and delicacy than a bigger modern instrument. Another challenge is to render the music as organically as possible. For instance, romantic composers expected performers to embellish the music with expressive devices such as portamento (slides), ornaments, and even improvised passages that were not written down in the score. I believe that rediscovering the way romantic music was intended to be performed makes it more exciting for a modern audience.

PV: Solo playing gives the opportunity to be the sole architect of the music you’re playing. It also permits to create a very close bond with the audience. On the other hand, ensemble playing allows musicians to share the emotions with one another, which is a very powerful experience. It is impossible to decide! I wouldn’t want to choose!

CP: Good thing you haven’t! And we are all looking forward to your concert on the 26th.

PV: Thanks so much!