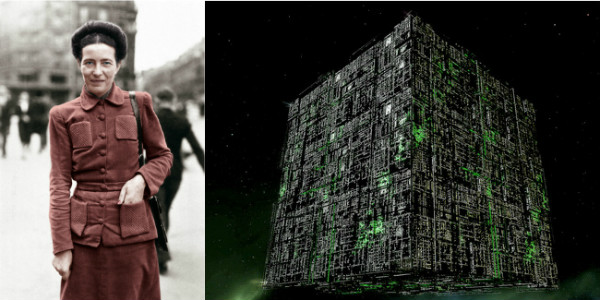 Think Olio and Thought Gallery announce a collaboration that will highlight a series of history, philosophy, music, and literary classes taught by some of New York’s top professors in the Rare Book Room of Strand Bookstore. Beginning with “Woman as Other, Woman as Lover:The Search for Self and the Politics of Love in Simone de Beauvoir’s The Second Sex” on January 13th, Think Olio will bring interdisciplinary classes to Strand every Friday evening at 7pm. Other classes include: “Is Resistance Futile? Immigration and the Search for an Authentic Self” and “Liberation Music: The Role of Jazz Music in Radical Politics of South Africa.”

Think Olio is a one-year-old organization, founded by CUNY students Chris Zumtobel and David Kurfirst, that brings top professors into the community for accessible, pop-up classes. What began in a living room has expanded into a growing community of lifelong learners and passionate teachers, now hosting several classes each week at venues all around NYC!

Professors value Think Olio at a time when universities pay less but require more. Professor Geoff Klock says, “You know how superheroes emerge to fight crime because the regular police are either inept or corrupt, and like Spiderman has to do the right thing himself? Take a look at education in America—ferociously expensive, myopically focused on job skills rather than actual thinking, mired in pointless testing and repetitive homework, featuring classes that promise the reliable sameness of a shitty fast food franchise—and notice that the Think Olio guys are zipping around New York saving people one at a time.”

Think Olio: How college should be. Think Olio provides professor-led programming at handpicked venues for the price of a movie ticket. Starting just over one year ago, Think Olio has held over 200 classes at more than 30 NYC venues. Their ethos: high-level learning with the best professors should be commonplace.

Thought Gallery: The best of brainy New York. As the only site dedicated to the intellectual life of NYC, Thought Gallery provides a unique resource for getting a handle on smart NYC, whether your passion is art, science, literature, or the city itself. TG’s weekly email newsletter, the Curriculum, seeks out the city’s signs of intelligent life and delivers them to the inboxes of a dedicated group of subscribers.