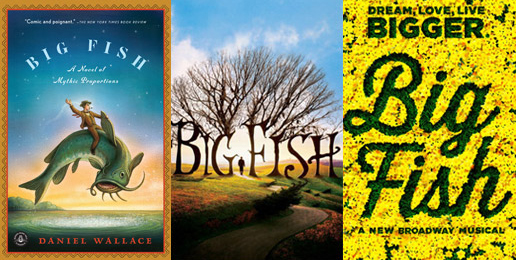 In Daniel Wallace’s 1998 debut novel Big Fish: A Novel of Mythic Proportions, Will Bloom struggles to understand his dying, fabulist father, Edward Bloom. He narrates a series of myths and legends his father has told him over the years. At turns comical and heartbreaking, the book became a successful 2003 Tim Burton film.

John August, who spent five years writing the screenplay, then spent the next nine years working to adapt the story of tall tales once more, into a musical. Aided by the talent of composer and lyricist Andrew Lippa and director and choreographer Susan Stroman, a dazzling $14 million musical version of Big Fish finally opened Oct. 6 at Broadway’s Neil Simon Theatre, starring Norbert Leo Butz as Edward Bloom, Bobby Steggert as Will, and Kate Baldwin as Edward Bloom’s love, Sandra. 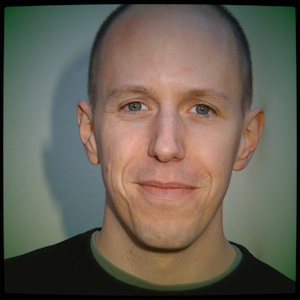 August, Wallace, Lippa and Stroman, in addition to film and musical producers Bruce Cohen and Dan Jinks, will be at the 92nd Street Y on Nov. 24 to discuss the process of adapting a story from a book, to a film, then a musical. The evening will also include a couple of numbers from the show, performed by Baldwin and Steggert.

“I fell in love with the book when I read it, back in 1998,” says August, whose film credits also include Go, Charlie’s Angels, Titan A.E., Charlie and Chocolate Factory, Corpse Bride and Frankenweenie. “It’s a realistic family situation, told in a fantastic way. I’d lost my own father years before, and [working on the screenplay and musical] gave me a way to write and deal with the experience.”

During the film’s test screening, August thought, “I really think there is a stage musical here, these characters want to sing.” Admittedly, Wallace, when approached about doing a musical, “was incredulous,” says August. 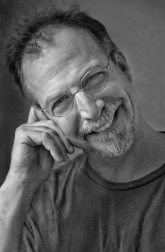 “I thought it was absurd,” Wallace says. “But, I was wrong.” While he wasn’t sure how the book would fly as a film or a musical, Wallace “loved the power of the idea to inspire other people. It’s a very intimate book in many ways, people look at their own relationships. The fact that John [responded the way he did] did was thrilling.”

Writing a musical [adapted from a book, film] has its challenges. “In a book or a film, it is easier to show a character’s introspection; can’t do that in a musical. [Lyricist] Andrew Lippa helps us [convey introspection] with his songs.”

Of course, there are risks. The success of film-to-musical adaptations can be hit (Matilda) or miss (Nine to Five, Ghost.) There are musical versions in the works for Rocky and Bridges of Madison County. “In a musical, because everything is live, audiences participate in the process,” August says.

The musical does take liberties with the story. “In the [film and] musical, we made Will a real character [not just the narrator], with a wife.” Casting is crucial; two-time Tony winner Norbert Leo Butz is earning rave reviews in his portrayal of Edward Bloom. In the show, he portrays Bloom at different ages, spanning teenager to elderly man (in the film, Bloom’s portrayal is split between Ewan McGregor and Albert Finney.) “We sought him out for this part,” August says. “It’s a big, demanding role. He’s terrific.”

Wallace is very pleased with the musical. “I think John is wonderful, I respect him so much as a writer. It’s different from both [the book and film], it needs to be. They’re still my characters, my story, the spiritual underpinnings are exactly the same as the book. I think that in many ways the musical is closer to the book, the relationship with the father and son is much closer.”

Wallace and August are looking forward to the 92nd Street Y event. “What’s great about sessions like this,” August says, “is that they give a chance to look at the creative process-a vision in one person’s head differs-how to create a [collective] vision with so many, it’s like slowly building a fire, carefully adding tender, creating a glow.”

August admits he’s dedicated “more than a third of my life” to working on the film and musical adaptations of Big Fish, but is open to working on new, smaller scale interpretations down the road. “I’m delighted with the Broadway show, but I’ll probably be working on the show my whole life.”

Uncover more previews of top events and be the first to know about new lectures by joining the Thoughtlectual community at no cost. Click here to join.