If you were to look at the career trajectories of Adam Braun and Brandon Stanton, you’d see a similar theme.

Both found themselves in high-powered jobs in their early 20s—Braun as a management consultant at Bain & Company and Stanton in bond trading—where they excelled for a few years before life suddenly took a left turn. Both experienced eye-opening, “holy shit” moments that contributed to where they’ve ended up today. And both are now, at just 30 years old, highly influential figures who have turned their respective passions into successful businesses. 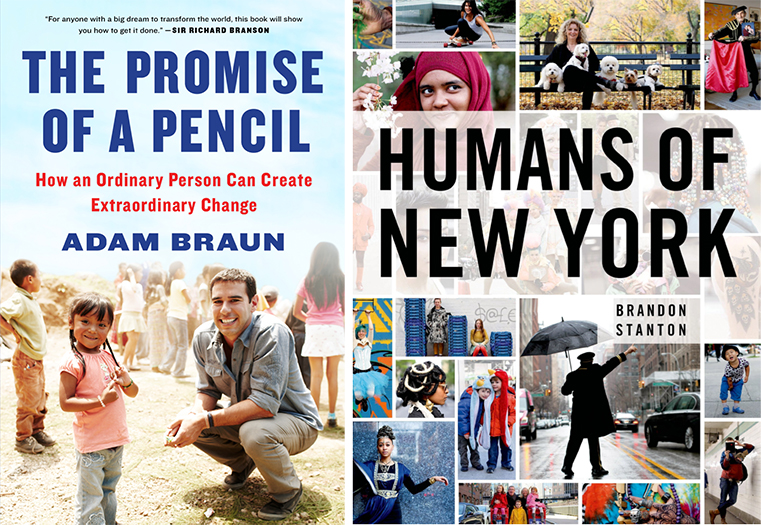 Stanton, the founder of Humans of New York, turned his passion for photography and New York City into a blog that now has 4 million Facebook fans and eventually spun into a book, which was released in the fall.

Braun turned his passion for education into Pencils of Promise, a nonprofit organization that’s raised $15 million and built 200 schools in underserved countries. Braun’s book, The Promise of a Pencil: How an Ordinary Person Can Create Extraordinary Change, was released March 18, and he sat down to discuss the work with Stanton at Barnes & Noble in Union Square just two days later.

On taking the stage, Braun revealed that he’d asked Stanton to interview him using the same approach he employs when interviewing subjects for Humans of New York. Stanton warned him that the questions were not easy—he approaches complete strangers and asks deep questions with the hope of soliciting honest and surprising answers. While Braun and Stanton are not strangers—they’re actually friends, they told the audience—the HONY approach worked just the same.

Stanton: What is your greatest struggle right now?

“Getting sleep,” Braun replied. A self-proclaimed “bad sleeper,” Braun encouraged the audience to “embrace the late sleepless nights,” when your mind is racing with an idea and you’re excited to get started on a new project.

“It’s mind-blowing to think that it was five years ago when I came home with a fervor to start Pencils of Promise, and now I’m sitting on this stage with all of you,” Braun said.

S: If you could give once piece of advice to a large group of people, what would it be?

“Make your life a story worth telling,” Braun said, quoting the title of his book’s epilogue.

Braun realized the power of this statement in college, he said, during a Semester at Sea program that went terribly wrong. Braun expected to spend a few months traveling the world on a cruise ship—instead, he was quickly forced to contemplate his own mortality.

“Thirteen days in, my ship got hit by a rogue wave. The swells went over the bridge, and we lost all power to steer the ship. A panicked announcement came on, telling us to get to the muster stations. It was January in the North Pacific—you don’t evacuate, you perish at sea. About 30 seconds after I realized I’d die, I felt calm and that I had something more to do. Ultimately, in that moment, I had the knowledge that my life existed for a purpose.

“I think every person out there has a purpose,” he added. “Live your life in a way that you would be excited for others to share about you.”

S: What’s the saddest part of your story?

“I knew I couldn’t change her past, but I thought I could change her future. I dedicated the school to her so her legacy could carry on.”

S: Who would you say is a character that has had the most influential role in your story?

“I would say Lanoy,” Braun said. He met Lanoy a few years ago at a guesthouse in northern Laos, where she worked. Braun realized he needed a translator to speak to the people in the village about the school he was planning to build there, and he asked Lanoy to be the first volunteer coordinator for Pencils of Promise. When she said yes, Braun told her: “I’m going to train you to be a leader.”

“I helped her open and create her very first email four years ago, and now she manages a staff of 27 full-time workers and 50 construction team members. That’s an amazing thing for a woman to do in Laos,” Braun said.

“It demonstrates the power of what you’re doing,” Stanton said.

“I think the mistake people make is they think they have to do something by themselves,” Braun said. “What I learned there was the single most important thing you can do to support your own success it to invest in the well-being of others.”

S: What was the most unexpected challenge you’ve faced?

“When you first start to hear yesses,” Braun said. “At first, everyone kept saying it was impossible. We had no money, we were too young—I thought, ‘That’ll be our rally cry.’ That sense of being the underdog empowered us, and we rallied around it. Then suddenly there was a wave of interest, all of these organizations started coming to us. I still struggle with saying ‘no,’ but I do it so I can actually mean it when I say ‘yes.’”

S: Something I like to do is create awkward moments between two people, and I know your father is sitting in the front row. What would you say is your father’s greatest quality?

After a laugh and a pause, Braun replied: “He believes in his kids so hard. He instilled this belief in all of us that it’s okay not to be normal, and in fact it should be celebrated. It’s great, but even now it’s scary—it’s a very vulnerable place to be. But my dad just believes in us really hard and that’s given us confidence.”

S: In your time doing Pencils of Promise, what has been your proudest moment?

“The groundbreaking of our first school, in Laos,” Braun replied. “I saw these grandmothers carrying huge things of wood, and I tried to stop them but they brushed me away. They’ve been waiting years to be able to carry wood for their grandchildren’s school.”

“Emotionally the most fulfilling moments were the very first signs of success,” Stanton said of HONY. “It’s inspiring, because it shows that those moments of gratification are closer than they seem. It’s not when you achieve the upper echelons, it’s when you take a risk and do what you love and you see the first glimmers of success.”

“The song basically says—and I’m paraphrasing—when you’re in a little room and you have a big idea, you need a bigger room. If things don’t work out, you go back to your little room, back to where you started. The beauty is in the little room. That’s where it’s special.”

At this point in the interview, Braun took several questions from the audience, the first of which was about when he knew Pencils of Promise was going to be successful.

“A lot of people have this belief that there’s one thing that suddenly allows you to make it,” Braun replied. “But anyone who’s had success knows that there are many small, medium, and large successes—you have to work and work at it. When I knew what I wanted to do, I didn’t start the organization until four years later. I had to figure out who I wanted to be, not what. All these little lessons happened along the way. I got an ultimatum from my job and the weekend to think about it, and on my walk home to my apartment in the East Village I saw a new De La Vega graffiti right outside my apartment that said ‘Become Your Dream.’ And I thought—that’s it.”

Audience question: How did you first start to market yourself?

“I did not market myself at all,” Braun replied. “That’s a mistake a lot of people make. You only get one chance at a first impression. You should only market yourself when you have two feet to stand on. I gave my first interview two years after we started Pencils of Promise because I was waiting on three things. The first was the infrastructure to convert intention into action. The second thing was a best in class website. Your website is your storefront, your business card—it’s everything. The third thing was what I call a ‘holy shit’ story. We needed a story that people would say, ‘Holy shit, how have I not heard of this?’ And I thought that would be building 10 schools.

“I did not fundraise,” Braun continued. “I conveyed a vision and hoped people would support it.”

Audience question: Why did you choose to focus on education?

“I’ve come to realize recently that the cause people get into usually comes from a deep personal experience,” Braun said. “Through multiple generations, education helped raise my family out of poverty, and I saw the incredible potential it had to address other issues. When you look at lifting people out of poverty, the only way that happens is by educating the next generation of youth.”