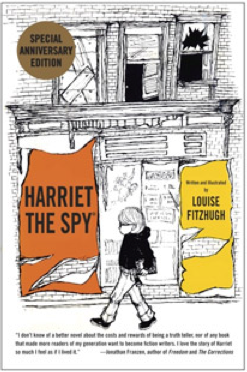 New York Times best-selling author Gregory Maguire and Newberry Winner Rebecca Stead shared their memories of how the tween protagonist turned them as young readers into spies and into writers as adults.

Children’s book historian and critic Leonard S. Marcus, who moderated the conversation between the two authors, also amiably modulated the irrepressible audience filled with Harriet fans, some who didn’t always wait until the Q-and-A to recount their own memories.

Though they are in middle-age, when Harriet the Spy fans recalled how the book spoke to their discovery of self-identity during those angst-filled tween years, it sounded as much about their past as their present.

When asked whether Harriet has aged well, Stead answered, “Yes. She’s so honest. She recognizes the real emotions. She’s aggressive, negative, has a lot of fear. … She’s asking questions I don’t think we have the answers to.”

Maguire added, “The reason Harriet is a spy and why we’re all spies” is to search and question. “Harriet has very few breakthrough moments of understanding.”

For these and other reasons, Harriet the Spy nor Harriet were universally lauded half a century ago as suitable for shaping young minds. Fitzhugh created a female character who dressed like a boy in “an ancient pair of blue jeans,” had unkempt hair, purposefully wore eyeglasses without any lenses so she’d look smarter, was fiercely independent and a risk-taker, did her sleuthing on her own terms, spied with zeal on her classmates, neighbors, parents and even her beloved nanny Ole Golly, and wrote brutal but truthful observations about them all in her spy notebook.

Maguire, Marcus and Stead, as well as the moderator and audience members discussed Harriet as if she were not only a genre-bending, gender-breaking pioneer character back in the day, but also as if she were actively present in the world at-large today.

“This book came a year before [naughty 9-year-old Max in] Where the Wild Things Are,” notes Marcus. “I like to think Harriet is Max’s older sister.” They imagine Harriet’s career nowadays might be anything from working for the National Security Agency or the Central Intelligence Agency to being a blogger, journalist or children’s book author. Who is she as a contemporary writer? Suggestions like Nobel Laureate Alice Munro and New Yorker writer and National Book Award-winning novelist Jonathan Franzen are immediately voiced.

The audience of 40- and 50-somethings made it clear that Harriet the Spy and the book’s 11-year-old sleuth not only touched their childhood, but also helped shape their adulthood.

When the Q-and-A officially begins, one woman says, “I grew up in Memphis, went to the same high school as Louise Fitzhugh, and we had a Spy Club just like Harriet.”

Another mentions the now defunct Purple Socks website, a forum for Harriet the Spy fans and kindred spying spirits. At that, Maguire quickly pulls up a pant leg, proudly displaying his purple sock. In the book, the Boy with the Purple Socks, who is in Harriet’s class, was “so boring no one ever bothered to remember his name.” For many, Purple Socks came to signify affirmation of self and self-worth.

Others chime in, calling out memories of their “spying” days as youngsters with obvious relish in the company of fellow-spies. Several reveal they are librarians, teachers, writers.

Stead also confesses: “When I read Harriet the Spy, I started spying, with my friend David” in her apartment building. Maguire, earlier in the talk, shared that “Harriet taught me how to take notes…to pay attention to language.” He then showed the audience his “Spy Journal,” written in 1967, revealing “I have 47 volumes of journals and only two years ago” moved from handwriting in the journals to computer. Harriet taught me “how to listen in on the world.”

Underscoring the book’s lasting effects on affirming them as inquisitive, questioning and fallible human beings, as well as shaping them as writers, each author reads a favorite passage.

Stead selects the book’s opening paragraphs, in which Harriet is explaining to her best guy friend Sport how to play Town, a game she’s just invented. Sport is distinctly uninterested, wanting her to play football instead.

Sport moved back a pace. “Looks like an old tree root,” he muttered.

Harriet pushed her hair back and looked at him seriously. “Sport, what are you going to be when you grow up?”

“You know what. You know I’m going to be a ball player.”

Maguire chooses to read what Harriet writes in her spy notebook – on the first day back to school and sixth grade — about the school’s dean Miss Angela Whitehead:

MISS WHITEHEAD’S FEET LOOK LONGER THIS YEAR. MISS WHITEHEAD HAS BUCK TEETH, THIN HAIR, FEET LIKE SKIES, AND A VERY LONG HANGING STOMACH. OLE GOLLY SAYS DESCRIPTION IS GOOD FOR THE SOUL AND CLEARS THE BRAIN LIKE A LAXATIVE. THAT SHOULD TAKE CARE OF MISS WHITEHEAD.

Maguire also discloses that Harriet’s readiness to admit “she didn’t know something,” helped him build greater self-confidence earlier in his writing career. “So what, she thought; I could always learn.” Harriet, apparently, is still helping those long-ago middle-school readers. As if prescient, she imagined them in their middle-age and wrote these encouraging words to them in her spy notebook:

WHAT IS TOO OLD TO HAVE FUN? YOU CAN’T BE TOO OLD TO SPY EXCEPT IF YOU WERE FIFTY YOU MIGHT FALL OFF A FIRE ESCAPE, BUT YOU COULD SPY AROUND ON THE GROUND A LOT.

In turn, they came to the 92nd Street Y one Saturday in March, 50 years after Harriet’s creation, to honor Harriet the Spy and to collectively receive her writing and proclaim they are still spying. Even if on the ground a lot.