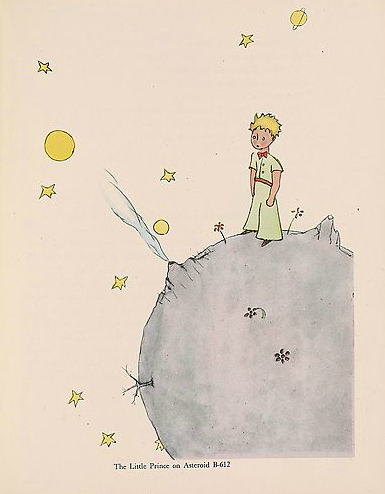 Saint-Exupéry arrived in New York on New Year’s Eve in 1940, fleeing Nazi-occupied France, to convince the U.S. to enter the war against Germany. He didn’t think France could win otherwise, and he didn’t think Charles de Gaulle, a general and statesman, was the future of France.

These and other surprises are revealed in a lively, often humor-laced conversation, between his biographer Stacy Schiff and the curator of the “Saint-Exupéry in New York” exhibition, held at The Morgan Library & Museum on March 11. The exhibition marks the 70th anniversary of the publication of The Little Prince.

In another surprising moment, the audience is treated to a 1942 film, revealed publicly only recently in 2010 when it was hailed a miracle. The rare 2-minute footage shows Saint-Exupéry on a boat in Montreal, Canada, holding court and surrounded by women. Believed to be the only film record of his wife Consuelo, it shows her piloting the boat, yet keeping a watchful eye on her husband. Saint-Exupéry is highly animated, balancing an ever-present cigarette in one hand, gesturing broadly with the other, and smiling. At that time in his life, he is, in fact, depressed and suffering ill health.

Saint-Exupéry seems to have lived a life filled with riveting, unexpected turns.

“He comes to New York for four weeks and stays for two years,” says Schiff, a noted New York Times guest columnist and a 1995 Pulitzer Prize finalist for Saint-Exupéry: A Biography.

Turns out, the acclaimed novella is only one of the significant works “Saint-Ex” – as Schiff refers to him – wrote while in or awaiting visa entry to New York.

Among the works is Letter to a Hostage, which “Saint-Ex” dedicates to his dear friend, author and art critic Leon Werth, to whom “Saint-Ex” also dedicates The Little Prince.  Werth “…becomes the past. The lost French culture” that “Saint-Ex” longed and mourned, according to Schiff. 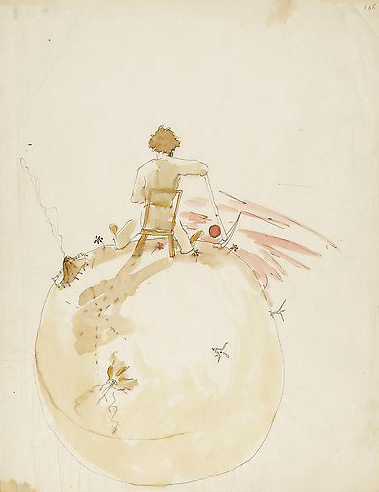 A pioneer in aviation science, Saint-Exupéry crashed many times, flying solo in open-cockpit planes when aviation was in its infancy in the 1920s. He’d repair planes, sometimes with only “a hammer and a bottle of glue,” before taking off in flight, again, Schiff say. He decried the mechanization of airplanes, saying, “This isn’t flying anymore, this is an accountant pushing buttons.”

To say Saint-Exupéry was peripatetic in the broadest sense would be an understatement. Fleeing Nazi takeover of France in 1940, Saint-Exupéry makes his way from war-torn France to Portugal and then to North America. Prior to the war, he achieves fame in France for his long career as a commercial aviator with Aeropostale, successfully opening new air courier pathways from South America to Europe to West Africa. During WWII, he flies reconnaissance missions in the French Air Force (Armee de l’Air). And, after his 27 months in North America, he joins Free French Air Force in North Africa, fighting alongside his fellow Allied aviators, among them American pilots he trained with while living in the U.S.

His journey to aviation and writing acclaim however was surprising. He was born into aristocracy, which expected him to follow a career in either the diplomatic corps or the military.

“In France, in those days, you didn’t fail to find your way. Your path was fixed,” Schiff observes. Saint-Exupéry “fails at a number of things. He was a truck salesman, then a tile salesman…” among other itinerant jobs. In her view, he was able to “extract himself from the straitjacket of French society.… noblesse oblige was always the way for Saint-Ex.” To underscore how this ethos shaped him, a passage is read from Schiff’s biography: “It took all of Saint-Exupéry’s tenacity to overcome the advantages of his birth; doing so was one of his greatest achievements.”

Flying on a reconnaissance mission over German-occupied southern France, Saint-Exupéry, at age 44, disappears, just weeks before Allied forces land in the same region. His body was never identified. While parts of the plane he was flying are recovered 60 years later in 2004, the myths surrounding his death continue. Like his little prince after viewing 44 sunsets, Saint-Exupéry simply disappears

The Little Prince: A New York Story is on view at the Morgan Library & Museum now through April 27. It is the first exhibition to explore in depth the creative decisions Saint-Exupéry made as he crafted his beloved story that reminds us that what matters most can only be seen with the heart.