Unlike his best-selling memoir A Long Way Gone, Ishmael Beah’s second book is a work of fiction set just after the conclusion of the decade-long civil war in Sierra Leone. 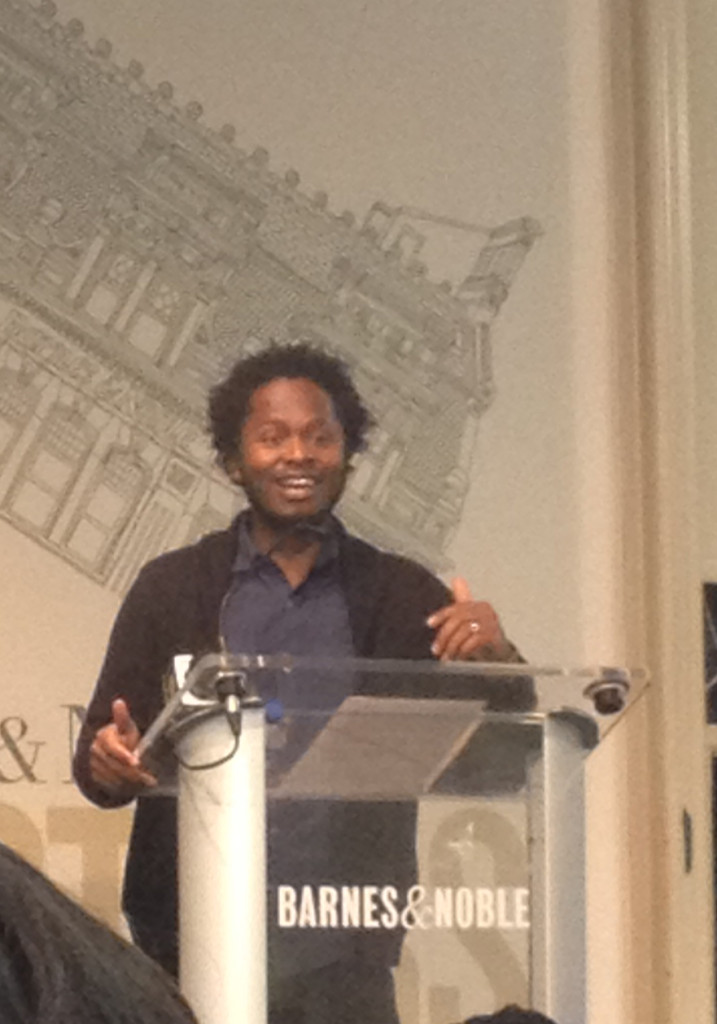 Ishmael Beah strode quietly and humbly onto the stage at Barnes & Noble Union Square on Jan. 7. While a staff member introduced the author, heavily praising his 2007 bestselling memoir A Long Way Gone: Memoirs of a Boy Soldier, Beah kept his eyes down and his movements small. When it was his turn, he approached the microphone and shuffled his notes a bit before finally raising his eyes to his substantial audience, thanking them for braving the frigid temperatures to hear him speak about his new novel, Radiance of Tomorrow. As he mentioned the book, Beah came to life—beaming a warm smile out to his listeners and emitting a tangible sense of excitement.

Unlike the memoir A Long Way Gone, Beah’s second book is a work of fiction set just after the conclusion of the decade-long civil war in Sierra Leone.

“When I was on tour for the first book, I observed how people thought about Sierra Leone based on what they heard or knew about the war,” Beah said. “You don’t think about what happens there after the war. I started to wonder, how do you go back? What parts of your tradition do you hold onto and what do you throw out? When you return, you have to clean up even the bones to begin living in the ruins. You go home because home is home, but what does that do to you? How do you move toward the future when the past is pulling at you?”

It may sound like a gloomy premise, but the book has a marked note of hope and positivity. “Oftentimes people think about peace and happiness as the absence of any challenge in life, but every day you’re going to have challenges—some bigger than others,” he said. “Happiness is not the absence of any challenge, it’s a choice. And people are able to love each other tremendously, create families, and continue on with their lives no matter what else is happening around them.”

Beah said he wrote Radiance of Tomorrow using first-hand accounts of his visits to post-war Sierra Leone and some stories from his imagination. The result is a work of fiction, which Beah said gave him more freedom as a writer than he felt while he was writing his memoir. “I grew up in the oral tradition, and I brought that to the book,” Beah said. “Language in Sierra Leone is very lyrical. In Mende, instead of saying ‘night came suddenly,’ we say ‘the sky rolled over and changed its sides.’” The language also lends itself to parables, he said. “Some people would say, ‘Our dog sleeps in the cooking area,’ which means your family is hungry. If you cook regularly, the fire stays going and your dog doesn’t burrow there. But if the fire goes cold he will.”

Beah also follows the idea from oral storytelling that a speaker or author is only the shepherd of a story, who shares it and then leaves it up to the interpretation of his audience. “There are several messages I’m trying to convey. One thing is, what do you hold onto the most in the most uncertain time of your life, and what does that say about you as a person?” he said. “But I come from a culture where we don’t believe in singular truths. Everyone reacts differently because everyone has had different layers of experiences in their lives. I don’t want to give a final message in the book, but I hope it touches people in different ways.”

During the evening’s Q-and-A session, an audience member asked Beah if he preferred writing fiction or non-fiction. He responded: “I love writing. The discipline is the same, but with non-fiction you’re restricted by the facts. When I wrote A Long Way Gone, there was an emotional charge that came with it. I almost wanted to run away from writing it because it was painful to go back. With fiction, I created the world and was in command. I could play with language more and make the characters more multifaceted. But the task of bringing people into the story is the same. I write anything as if it were the first and last thing I’ll ever write in my life. I give it my all, with all the vigor I have within me.”

Another young audience member asked Beah if he planned to write more books. “I’m planning to write many more books. For me, writing I find is beautiful, but it’s also a task. It’s a way to be in charge of our history. I write to share stories from my people, otherwise there is a lot of misunderstanding about what we feel.”

Catch Ishmael Beah at the Greenlight Bookstore in Brooklyn on Jan. 20.

Uncover more stories like this and be the first to know about new book signings and readings at Barnes & Noble and other NYC venues by joining the Thoughtlectual community at no cost. Click here to join.