One of the most celebrated filmmakers, writers and producers in contemporary cinema, Spike Lee, sat perched on a stool before a filled-to-capacity crowd at Pratt Institute’s Brooklyn campus on Tuesday, Feb. 25. Here, sound bites from the evening. 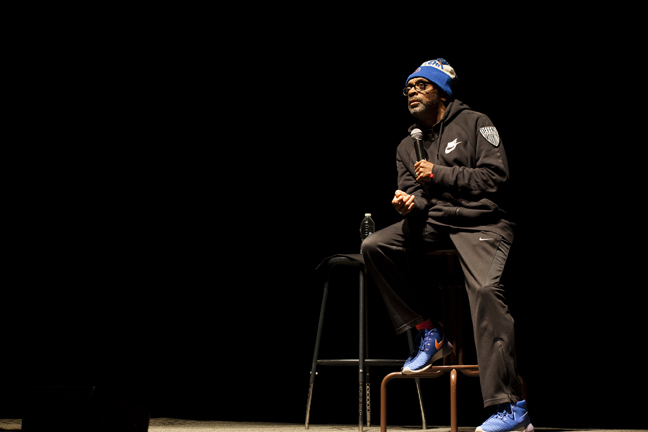 Sporting electric blue and bright orange sneakers and a steel-gray sweat suit, topped off by – what else — one of his trademark New York Knicks beanies, Spike was center stage. As soon as he took his solo spot, Pratt’s Memorial Hall auditorium went dark. The solitary light was trained on Spike.

That commanding staging and entrance was fitting, a worthy platform from which Spike could speak. Without a moderator, panel, or host, and, indeed, as discovered over the next 90 minutes, without a filter, Spike talked.

A Pratt Presents program, Spike Lee’s free talk was in honor of Black History Month and co-sponsored by the Division of Student Affairs, the Office of Student Involvement, and the Pratt Student Diversity Council.

“Parents kill more dreams than anybody,” he said. “Pratt students, you didn’t have to fight that. But musicians, poets, filmmakers can have the dream crushed. Told ‘You can’t make a career out of that.’ ”

Spike Lee on His Introduction to Film-making

“I didn’t find film. Film found me… I graduated from John Dewey High School, not knowing what I was going to do in college, at Morehouse. I was a D-plus, C-minus student in my freshman and sophomore years, he said, “but near the end of my sophomore year, the dean called me in and said, ‘Think about your major. You’ve exhausted all your electives.’”

“That was summer 1977. The hottest summer ever in New York. It was so hot that summer that we had a black out. Mayor Abe Beame said New York City was broke. I had my working papers but no job. I had a friend, Vietta Johnson. She was very smart. She got into Stuyvesant. She went to Princeton and then to medical school at Yale. She’s practicing in Chicago. That summer she had a Super 8 camera in a box and told me she didn’t want it, had no use for it. She knew she wanted to be a doctor. So she told me to take it. I took it, not because I wanted to be a filmmaker but I didn’t have anything to do for the summer. I was playing Strat-O- Matic baseball on the stoop.”

“Junior year I knew. I want to tell stories. I want to make films about African-American people. Money or being famous never came into my mind. I wanted to be a filmmaker.”

Spike Lee on How Brooklyn Informs His Films

“We were the first black family in Cobble Hill. It was Italian-Americans. The first couple of days, we got called ‘n*****.’  Then that was over. My films come from that.”

“I take education very, very seriously… The peer pressure on young black men is having a devastating effect. I love Jay-Z, but he’s only a high school graduate. And, Russell Simmons is saying, ‘I’ve never read a book.’ ”

“In this peculiar institution called slavery, it was against the law to read and write. If caught, the slave would get three things: whipped, castrated, hung. Despite that, our ancestors knew that education was the only way to the Promised Land. How is it that our ancestors risked their lives to learn how to read and write, but today, half of young black African-American males can’t read and write?”

“de Blasio may not be able to handle the snow, but we need affordable housing.”

“Then comes the Christopher Columbus Syndrome. You can’t just discover us. Get the f*** out of here!… The African-American population in New York City is going down. That’s called reverse migration… I don’t see a lot of good coming out of gentrification.”

“I just got back from Brazil. I’m shooting a documentary… Brazil was the last country on this earth to free its slaves… Bahia, Brazil is 85 percent black, but never had a black mayor. We have a black president and we’re 15 percent black.”

“Yeah, we’re doing School Daze II. Drop your head-shot off at the office.”

“Would I make a film about Barack Obama? Documentary or narrative? Too soon. Need distance. He’s still in office!”