Beginning Nov. 8 through March 23, 2014, The Jewish Museum will present Art Spiegelman’s Co-Mix: A Retrospective to celebrate the career of one of the most influential living comics artists: Art Spiegelman. Join Spiegelman and playwright Tony Kushner, both Pulitzer Prize winners, when they discuss issues of authorship and identity later this winter. 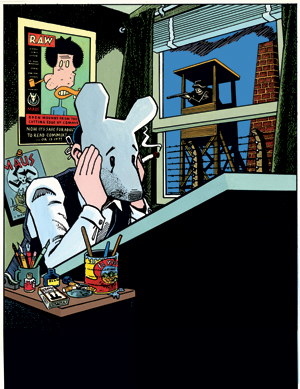 Click here for details on an upcoming conversation with Spiegel and playwright Tony Kushner on the exhibition.

Best known for Maus, his Pulitzer prize-winning graphic novel about his parents’ survival of the Holocaust, Art Spiegelman (b. 1948) has produced a diverse body of work that has blurred the boundaries between “high” and “low” art.

The exhibition highlights Spiegelman’s painstaking creative process, and includes over three hundred preparatory sketches, preliminary and final drawings, as well as prints and other ephemeral and documentary material.

Art Spiegelman has embraced the credo that comics are a medium for personal expression, creating candid accounts of his own experiences, dreams, neuroses and frustrations. He once noted, “Spiegel means mirror in German, so my name co-mixes languages to form a sentence: Art mirrors man.”

Spiegelman first made a name for himself as a cartoonist and editor in underground comix, the graphic expression of the counterculture of the 1960s and 1970s. As he matured as an artist, Spiegelman diverged from the sex and drug ethos of his peers and, in a post-modern fashion, increasingly challenged the narrative, visual, and structural possibilities of comics. He also began exploring themes that dominate his work to this day: intimate personal expression, memory and history.

In the 1980s Spiegelman reinvigorated underground comics by co-founding the avant-garde magazine RAW with his wife Françoise Mouly. RAW showcased the most groundbreaking graphic artists of the time, and serially published chapters of the then work-in-progress Maus.

Maus recounted his parents’ life in Nazi-occupied Poland and later at Auschwitz, as well as Spiegelman’s own complex relationship with his father, Vladek. Eventually published in two volumes (in 1986 and 1991 respectively) by Pantheon, Maus was the first of its kind in content and format: the unique structure of the comics medium allowed the artist to navigate time and memory beyond the limitations of prose, creating a rich narrative that exploded the boundaries of comics and nonfiction.

Refusing to be defined by the overwhelming attention brought by this singular work, Spiegelman largely turned away from autobiography in the 1990s, instead writing and drawing for The New Yorker and other publications, and began creating children’s books. But after witnessing firsthand the collapse of the Twin Towers on 9/11, he returned to personal narrative with his autobiographical account In the Shadow of No Towers (2004). This lifelong concern with memory and personal experience has continued in his short comic strip memoir Portrait of the Artist as a Young %@*&! (2008), and in MetaMaus (2011), a meditation on his creative process and career.

What to Expect at the Exhibit: Art Spiegelman’s Co-Mix: A Retrospective

A self-proclaimed “stylistic switch-hitter,” Spiegelman’s versatility and encyclopedic knowledge of comics history has allowed him to adapt his visual language to many contexts and audiences. For those most familiar with Maus, this retrospective exhibition will be revelatory, exploring his early formal experiments, honest self-exposés, as well as provocative illustrations, and comics essays. Museum visitors will gain an intimate look at an artist who continuously pushes himself and his art to the edge.

A key section of the exhibition focuses on Maus and features the second volume’s original manuscript (this was not shown at the previous exhibition venues as it was too fragile to travel). Other highlights on view include underground/homemade comics made when Spiegelman was in his teens and twenties; avant-garde comic strips published in the 1977 anthology, Breakdowns; concept sketches for the Topps Chewing Gum company, where for more than twenty years he devised concepts for bubblegum products, trading cards, and stickers; Portrait of the Artist as a Young %@?*!, a long, continuous strip created in 2008 reflecting on his formative memories and early career; illustrations for a 1994 edition of the flapper age epic poem The Wild Party; and art created for The New Yorker, including his first cover which pictured a Hasidic Jewish man and an African-American woman locked in a passionate Valentine’s Day embrace.

Also added for The Jewish Museum presentation is a final section, Still Moving, focusing on recent projects in unexpected media represented by drawings and videos. In 2010, Spiegelman collaborated with the dance troupe, Pilobolus to produce Hapless Hooligan in “Still Moving,” an innovative fusion of performance and animation. In 2012, inspired by the idea that stained-glass windows were “comics made before the invention of newsprint,” he completed It Was Today, Only Yesterday, a fifty-foot painted-glass mural for his alma mater, New York’s High School of Art and Design.

What’s Next for Spiegelman?

In Sydney, Australia, in October 2013 he premiered Wordless!, a hybrid of slides, talk, and musical performance created in collaboration with jazz composer Phillip Johnston, who performs an all-new score with his sextet. In this performance, audiences are taken on a personal tour of the first graphic novels and their influence on Spiegelman, who has also drawn a new work, Shaping Thought, specifically for the project. Wordless! receives its U.S. premiere at BAM in New York City on Jan. 18, 2014.

Born in Stockholm in 1948, Art Spiegelman was the first comics artist to win the Pulitzer Prize, which he received for the groundbreaking bestseller Maus. He co-edited Raw, and his comics have appeared in The New Yorker, The New York Times, Playboy, and Harper’s. Spiegelman has been named one of the 100 Most Influential People by Time, elected to the Art Director Club’s Hall of Fame, made a Chevalier de l’Ordre des Arts et des Lettres in 2005 (promoted to Officier in 2012), and played himself on The Simpsons. He lives in New York City.