“Writing is very hard. It’s like I Am Legend. It’s terrible, never do it.” — Amy Poehler 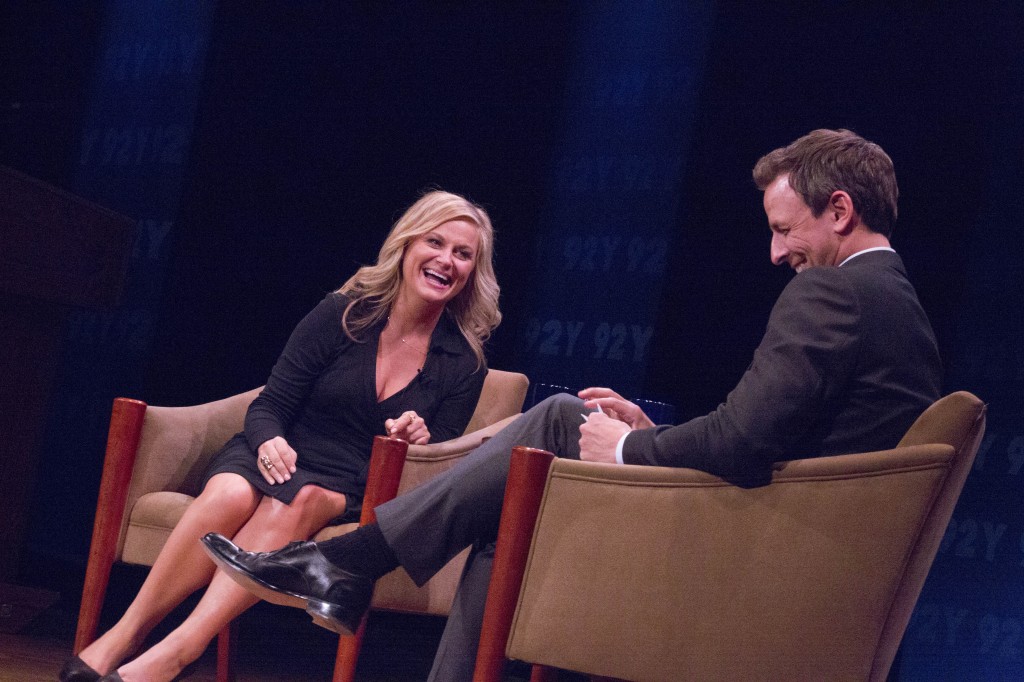 There are a few things Amy Poehler doesn’t like to do. One of them is running, the concept of which seems to absolutely baffle her: “It’s the least favorite thing I like to do in the world,” she says. Her second least-favorite thing? Writing about her personal experiences, which seems to be an emotional equivalent of running for her.

Luckily for us, Poehler hurdled over that block and entered the literary world at a full sprint on Oct. 28, when she released her first book, Yes Please (Dey Street Books). The memoir-like work recounts plenty of Poehler’s personal stories—from her pre-Saturday Night Live days all the way through to Parks and Recreation—and offers up the mom of two’s advice on everything from career to sex to motherhood.

Poehler stopped by the 92nd Street Y on Tuesday night to chat about her new book with Seth Meyers, fellow SNL veteran and current host of NBC’s Late Night with Seth Meyers. The result was an hour of predictable hilarity (beginning with Meyers’ comment that “The highest we ever dreamed was the 77th Street Y!”), in which the two masters of wit discussed waffles, drug interactions, Prince, and why the Internet is a terrible idea—not necessarily in that order.

If you’re wondering about the book title, it comes from Poehler’s overall approach to, well, life. Unlike running and writing about herself, she embraces most things that come her way. “Yes is my favorite word,” she told Meyer on Tuesday. “Yes has gotten me where I am today as far as my career—just being open to possibilities.” As for the second word, Please, Poehler said it’s an acknowledgement of the other people in her life who have helped her along the way. “It’s also just a nice title for my children to say,” she said of her sons, ages 4 and 6.

So how did the private comedienne come to write a memoir that spotlights some very personal stories? “My editors would be like, ‘You have to write about that.’ And then I wouldn’t email them back for three weeks,” Poehler said. “And then someone got a visit from a lawyer…”

Poehler’s advice to aspiring writers? “Writing is very hard,” she said. “It’s a very lonely process. It’s like I Am Legend. It’s terrible, never do it.”

Her career advice, though, was slightly more hopeful: “Treat your career like a bad boyfriend,” she said. “Your career will always be mean to you. It will never treat you right. It will flirt with other people in front of you. But your creativity is like a lovely old Hispanic woman—you know, with the crinkly skin around her eyes? She loves you and makes you delicious food, and you get along with her son. That’s what you should search out.” Career and success are fickle, Poehler said. “If you ignore that boyfriend, he can’t get enough of you. The less you focus on your career, the better off you’ll be.”

Poehler and Meyers agreed that, “You never make it to the top of Success Mountain and just relax.”

“It’s not like the work stops or that feeling of “What’s next?” goes away,” Poehler added. “It’s never quite enough, if you expect your success from career to fill you up entirely. When you’re feeling so far away from where you want to be, accept that that distance is always going to be the same.”

Meyers and Poehler both found great success—by most standards—after seven years together on Saturday Night Live. Poehler’s  readers get a look behind the scenes during that time at both her favorite moments and her most embarrassing (some of which are the same). Meyers and Poehler talked about what it was like for her to be on set while she was pregnant with her first child, Archie (who was born hours before an SNL broadcast).  “I was an animal,” Poehler recalled fondly. “It’s so fun to be that pregnant because you freak everyone out. You lower your voice, and your nose spreads, and people just get out of your way.”

After SNL, Poehler has been best known for her seven-year role as Leslie Knope on Parks and Recreation, which is in its final season on NBC. “It’s so bittersweet,” she said. “It’s so rare to work on a show that you love and would watch if you weren’t on it. And we get to be in charge of our ending, which so few people in TV get to be.”

Despite her success post-SNL, Poehler has yet to win an Emmy Award—although she’s been nominated 13 times. “The experience is more fun than worrying about winning,” she said. “Once I focused on what I liked to do, which is the bits [with the other nominees], the night got much more fun. Instead of stressing about whether or not I won, I was like ‘Did Vanessa Williams get the monocle?!’ ”

At the end of the event, Poehler took questions from the audience and from Facebook submissions before the event. Here are some highlights from the Q&A:

Q: If you could be quarantined with anyone, who would it be?
A: Dolly Parton.

Q: Where do you see yourself in 15 years?
A: In this seat, interviewing you [Seth] about that book you wrote after you killed that guy.

Q: If you could play the lead in any show other than Parks and Rec, what show would it be?
A: The Wire. I’d be McNulty.

Q: I’m 13 and want to be a comedian. What advice do you have for me?
A: Just copy exactly what the people you like did. That’s what I did. They studied where? They went to Chicago—I did that, too. Take classes at UCB, and write and perform as you get older.

Q: Leslie from Parks and Rec loves waffles. Do you like waffles in real life?
A: I do, but sometimes it’s hard to eat so many.

Q: What makes you happy?
A: Lately it’s trying to be a little more of service to others. Not enough people talk about that it’s okay to help others for selfish reasons. Whatever motivates you to be of service and help others, it doesn’t matter. There’s a whole chapter in my book about the Worldwide Orphans Foundation. When you get home, instead of going on—what are kids on now? Flash Buzz or something? Instead of that, Google “Worldwide Orphans.”

Q: Who is your role model?
A: My new role model is Anastasia. We met at Seth’s show. She taught me what it means to say sorry and what it means for someone to hear that. I ignorantly and cruelly portrayed a character with disabilities on SNL. There’s a chapter in my book that’s an apology to her about that.

Q: What caused you to start the “Smart Girls at the Party” campaign?
A: It’s an attempt to combat all of the awful stuff on the Internet. I think the Internet is a disaster and a bad idea. I think it should be stopped now. But while we have it, I thought let’s celebrate the curious young person. The idea is that what you’re interested in makes you interesting. And every episode ends in a dance party.

Q: What didn’t you say “Yes” to that you wish you had?
A: Having sex with more people. Now you think, “What’s the worst that could happen?”

Q: Amy and Seth, if you could steal one personality trait from each other, what would it be?
Amy: Your ability to run. Your stamina for running is amazing. As far as your actual being, I would steal your sharp wit that is so precise and specific but always feels inclusive and warm.
Seth: I’d steal your ability to dance and have fun dancing. As far as your personality—millions of things. But one of my favorite things about you is that you never let a room get down. On SNL, you were the most buoyant person in the room when the room really needed it. 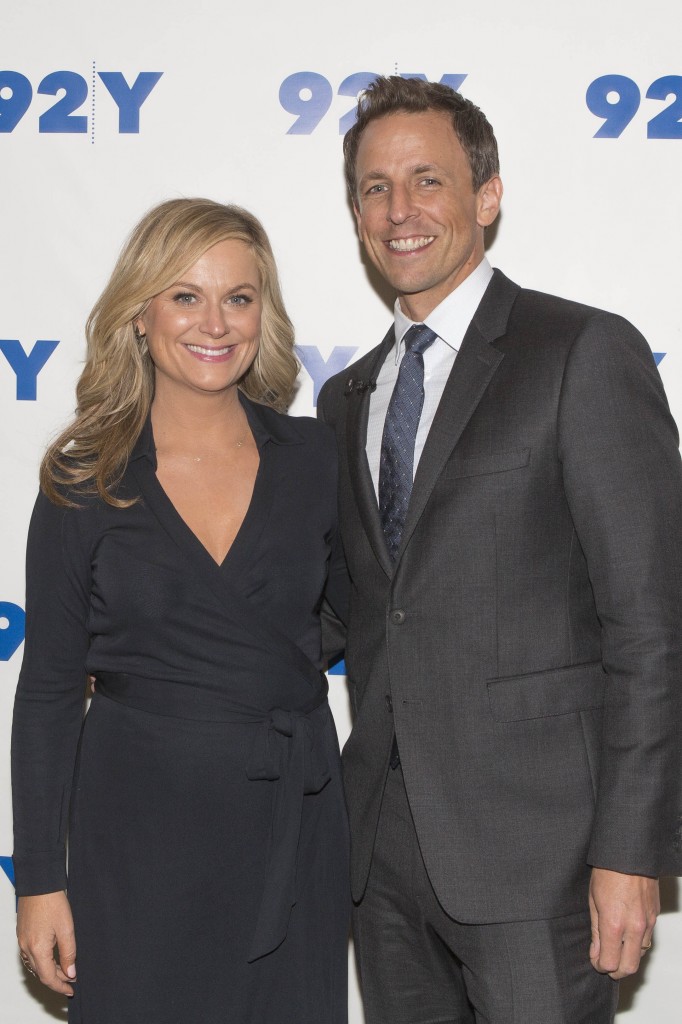