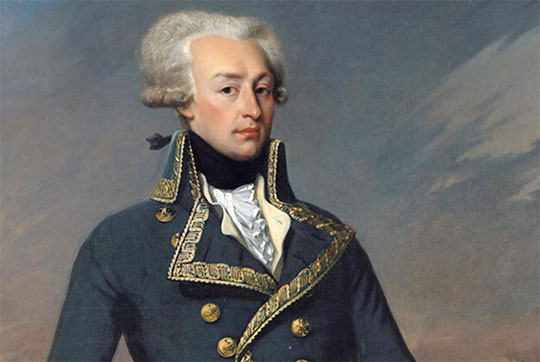 Revolutionary Acts: Remember when the Tea Party referred not to a political movement but to a seminal 1773 event in the colonies’ break from Britain? Refresh your memory at this New-York Historical Society discussion of the significance of “The Boston Tea Party and the American Revolution”, Oct. 8 … During that self-same American Revolution, the young, dashing Marquis de Lafayette (above) was worshipped by the colonists for coming to their aid; during the French Revolution, which began in 1789, his own countrymen adored him, too — at first. Find out about a hero’s fall from grace, at this 92nd Street Y lecture, Oct. 24.

Artisanal Works: Three years ago, an international team of architects, artists, and historians began building a duplicate of Poland’s Gwoździec Synagogue (the original, which dated from the first third of the 18th century, was destroyed during World War II). Watch the wooden structure come together (on film) and hear how the participants did it, at this YIVO Institute for Jewish Research presentation, Oct. 12 … The art of the silversmith began to shine in the 18th century. Listen to some of the stories etched in silver objects — about people, their homes, and their habits — in these lectures Oct. 20 & 27, at the Metropolitan Museum of Art.

Musical Interludes: Composer Jean-Philippe Rameau’s theories of harmony — not to mention the operas and concertos he created to demonstrate those theories — revolutionized music in the mid-1700s. Harpsichordist Jory Vinikour performs a few of his favorite pieces, on JPR’s favorite instrument, at this recital in the Abigail Adams Smith Auditorium, Oct. 9 … A few decades after Rameau, a young man named Ludwig von Beethoven began writing his first works. Learn about his formative years, and how they affected the course of his career, at the 92nd Street Y, Nov. 17 … Finally, follow the trail of a 300-year-old Stradivarius in the documentary The Return of the Violin; the screening is followed by a talk by none other than its current owner, Joshua Bell — also at the 92nd Street Y, Dec. 3.